We joined some new and old friends last week to make sorghum molasses and have a pot-luck lunch in South Knoxville, TN. Cooking molasses from sorghum is pretty labor intensive and it typically involves a lot of people and a day or two of hard work. The process involves cutting and stacking sorghum, peeling off the exterior leaves and cutting off the seed heads, extracting the juice from the sorghum, cooking the juice, canning the molasses, and cleaning up. That might sound pretty straightforward, but there are a lot of prep work and follow-up (cleaning) to each step in the process. I wasn’t around for the cutting, stacking, and hauling because we showed up when the peeling and milling just began. I tried to capture some of the details in the following pictures and text so you can see how molasses was (and still is) made by local farmers. 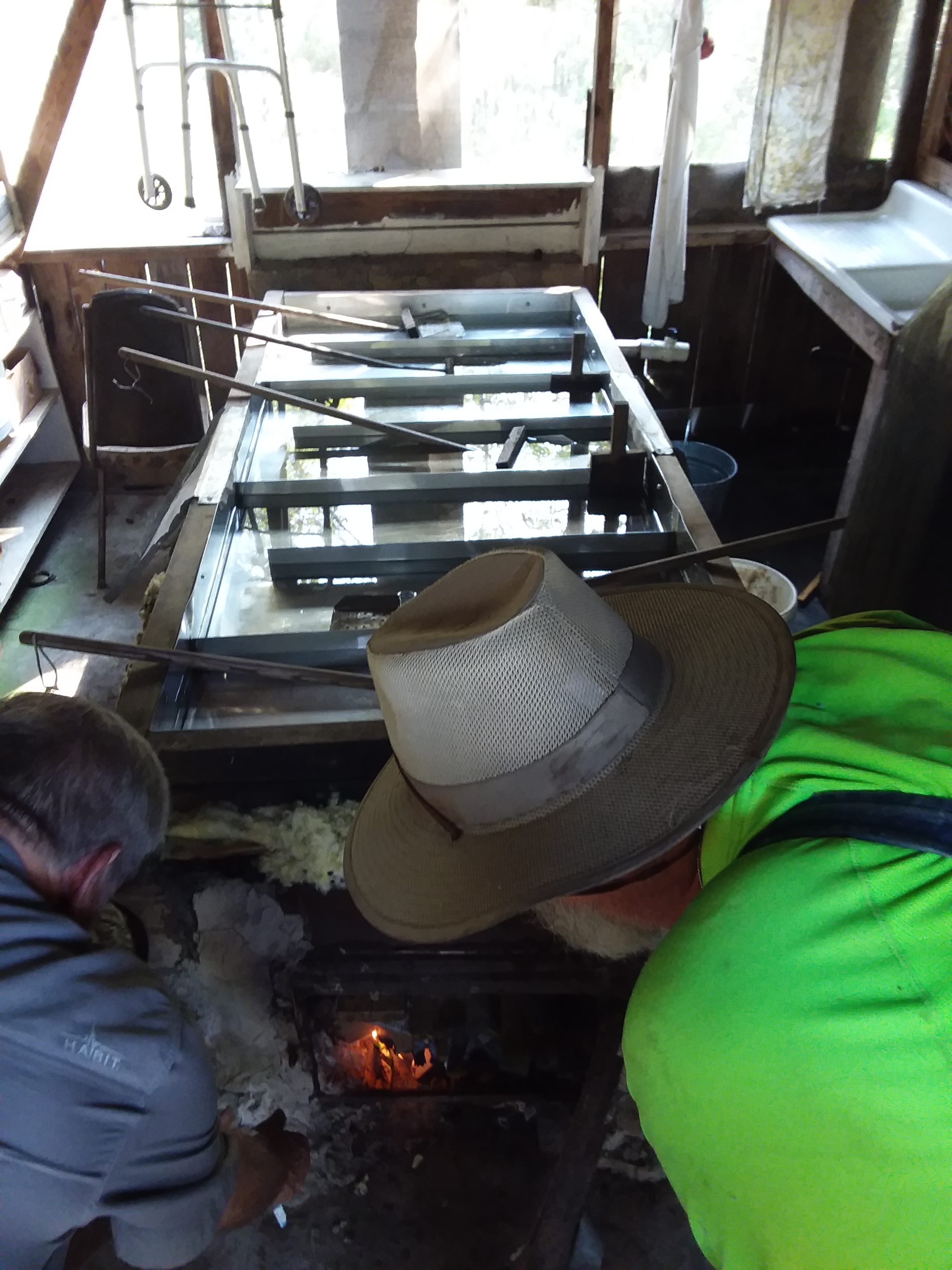 Before cooking begins, the pan is filled with water and firebox gets stoked until the sorghum juice can be quickly-heated and the juice can be rendered into molasses.

Fire Up the Cooking Pan

The first thing we did (since we skipped the harvest) was to light up the firebox under the cooking pan and get a lot of heat going. The pan has been filled with water to keep from scorching the pan.

It was about 88 degrees the day we did this so the temperature in the cookhouse was probably around 100 degrees. 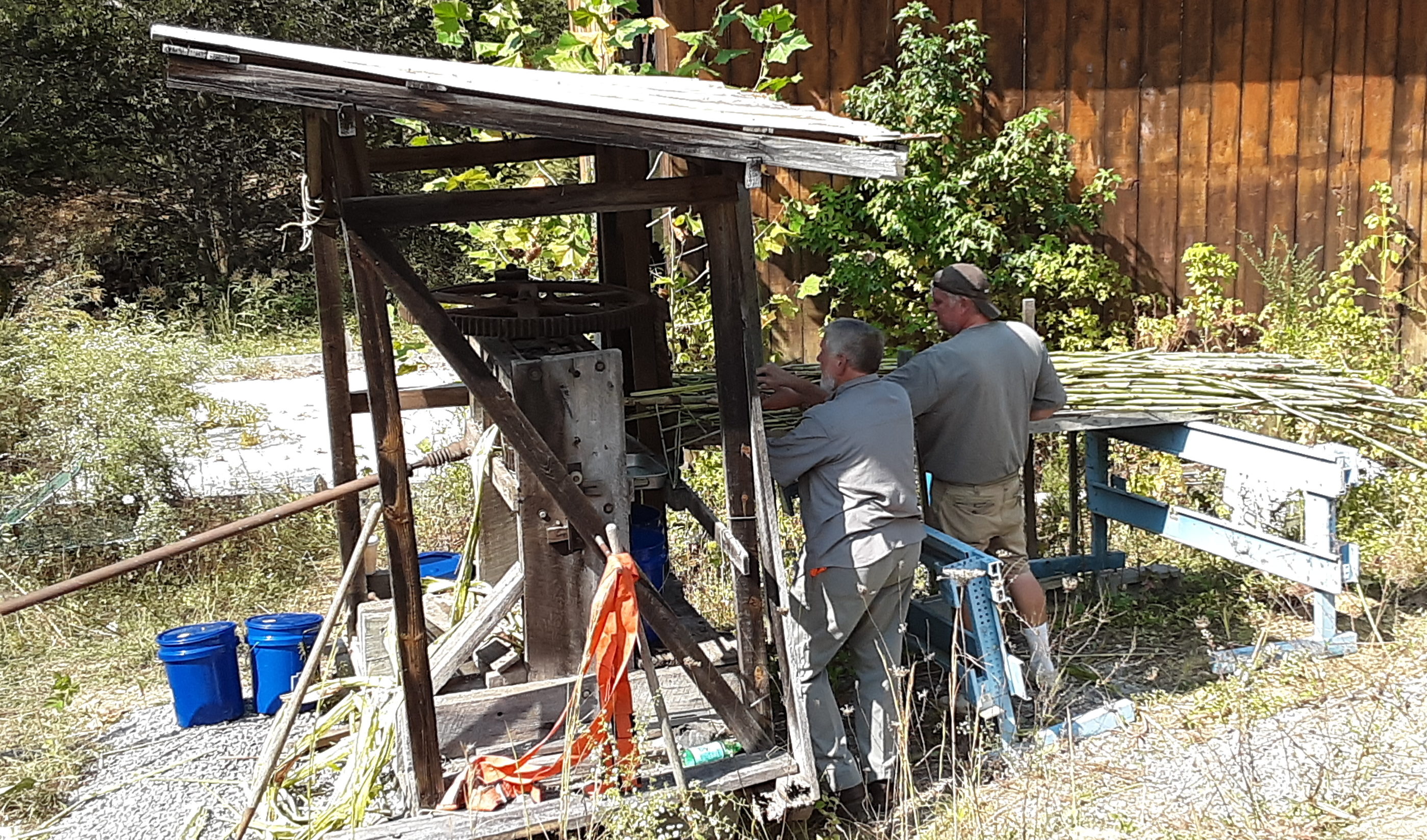 Feeding sorghum into the mill a few stalks at a time. 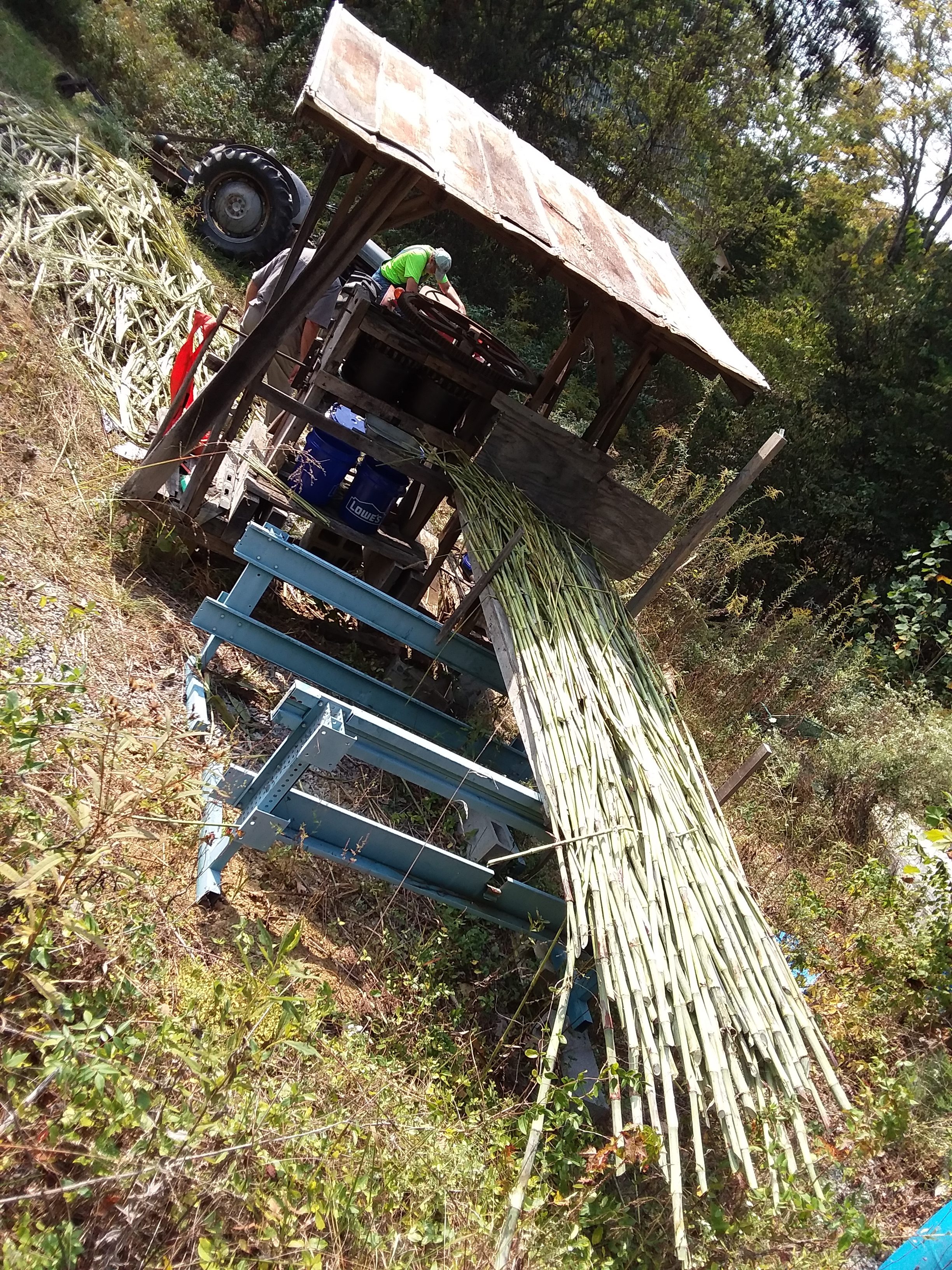 Another view of the sorghum mill.

Mill the Sorghum to Extract Juice

This is the mill that we used to extract the juice from the sorghum plants. You can see the stripped plant stalks to piled up on a rack in front of the mill. The mill turns at about 60 RPM (slow) and you can feed up to about 10 stalks at at time through the mill. The juice falls into the pan from between the two iron rollers, and then is collected in a five gallon bucket.

It takes a lot of sorghum and about half an hour to fill a five gallon bucket. The juice is very sweet, and you can drink it right out of the mill but it’s a lot better if you filter it through cheese cloth or a fine mesh, and pour it over ice.

This mill is more than 100 years old and is driven by a shaft attached to the PTO of a small 40 HP tractor. This works really well as long as the wind isn’t blowing the exhaust your way. You REALLY have to be careful not to get your fingers or anything else in those rollers… they didn’t design many safety features into farm equipment 100 years ago.

The spent sorghum still has a lot of sugar in it, and it’s been “tenderized” by the rollers so it all gets collected and used for animal feed later on. 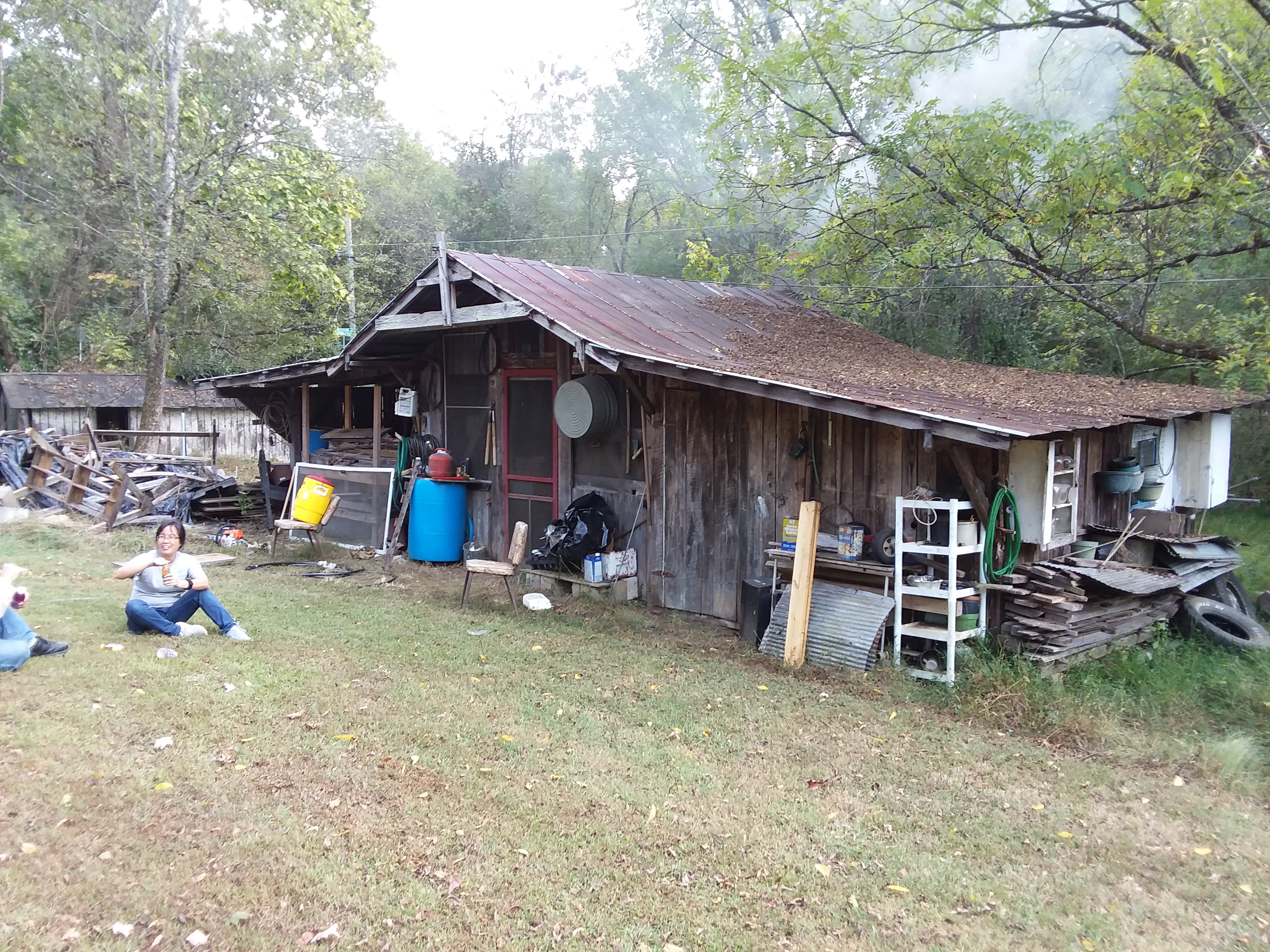 This is the cookhouse where the sorghum juice is rendered into molasses. This building is really old, and really hot. The back wall of the room with the cooking pan is just a screen so there is some air flow when there’s a good breeze, otherwise it gets really hot for the 6 or 7 people who are cooking and skimming the sorghum juice. 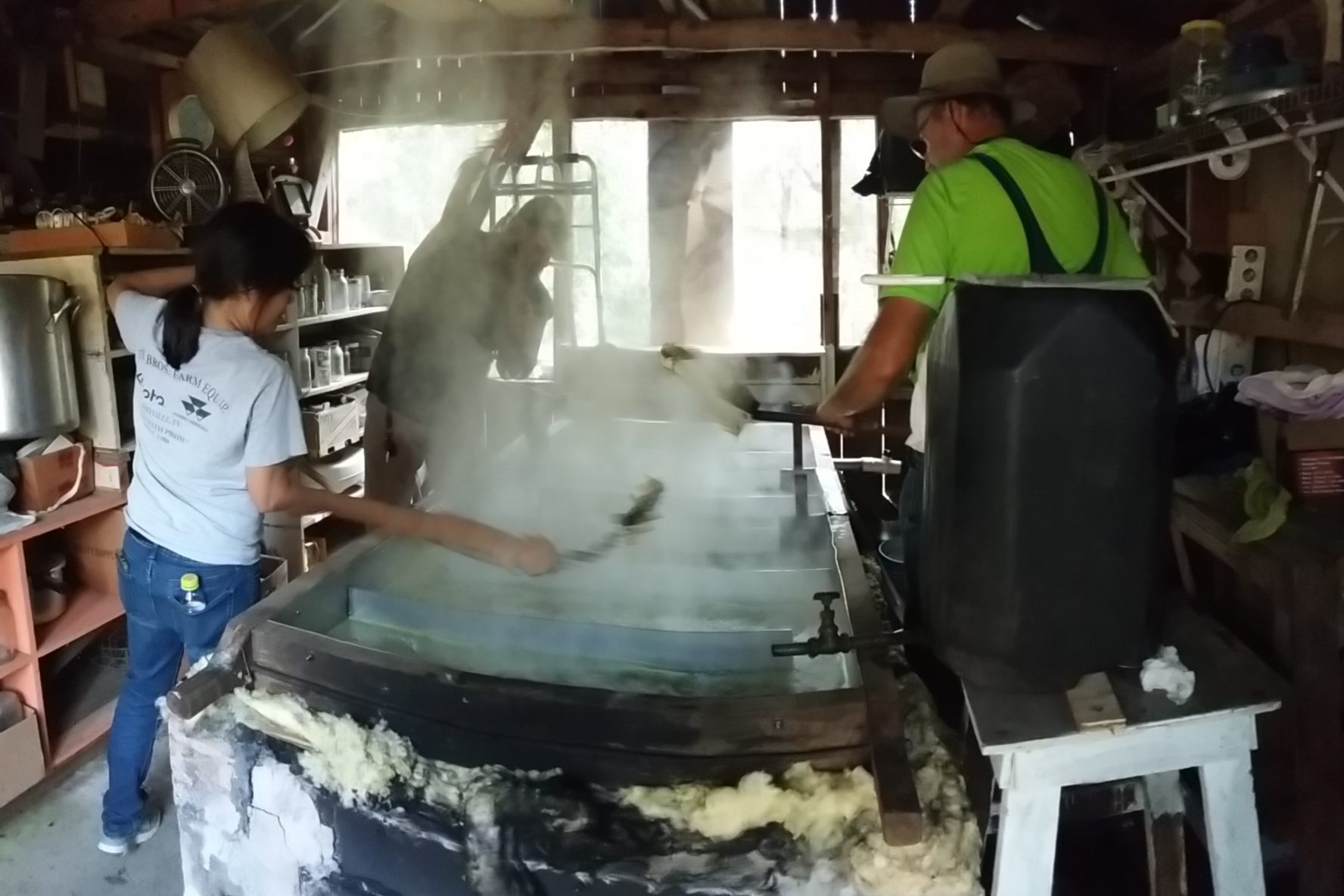 Cooking and Skimming the Sorghum Juice

The sorghum juice is poured into the pan via the spigot attached to the small black barrel in the bottom right corner of this picture. The pan is about six inches deep and has foot-wide channels so the sorghum travels about 30 feet in the pan from start to finish.

As the sorghum juice cooks into molasses, the water cooks off and the plant material and chlorophyl rises to the top. There are typically 3 to 5 people with perforated pans on a stick that skim the plant material off the top of the juice, making sure there is nothing but molasses in the pan by the time the molasses drains out the far end of the pan.

This job is like cooking candy in a sauna! 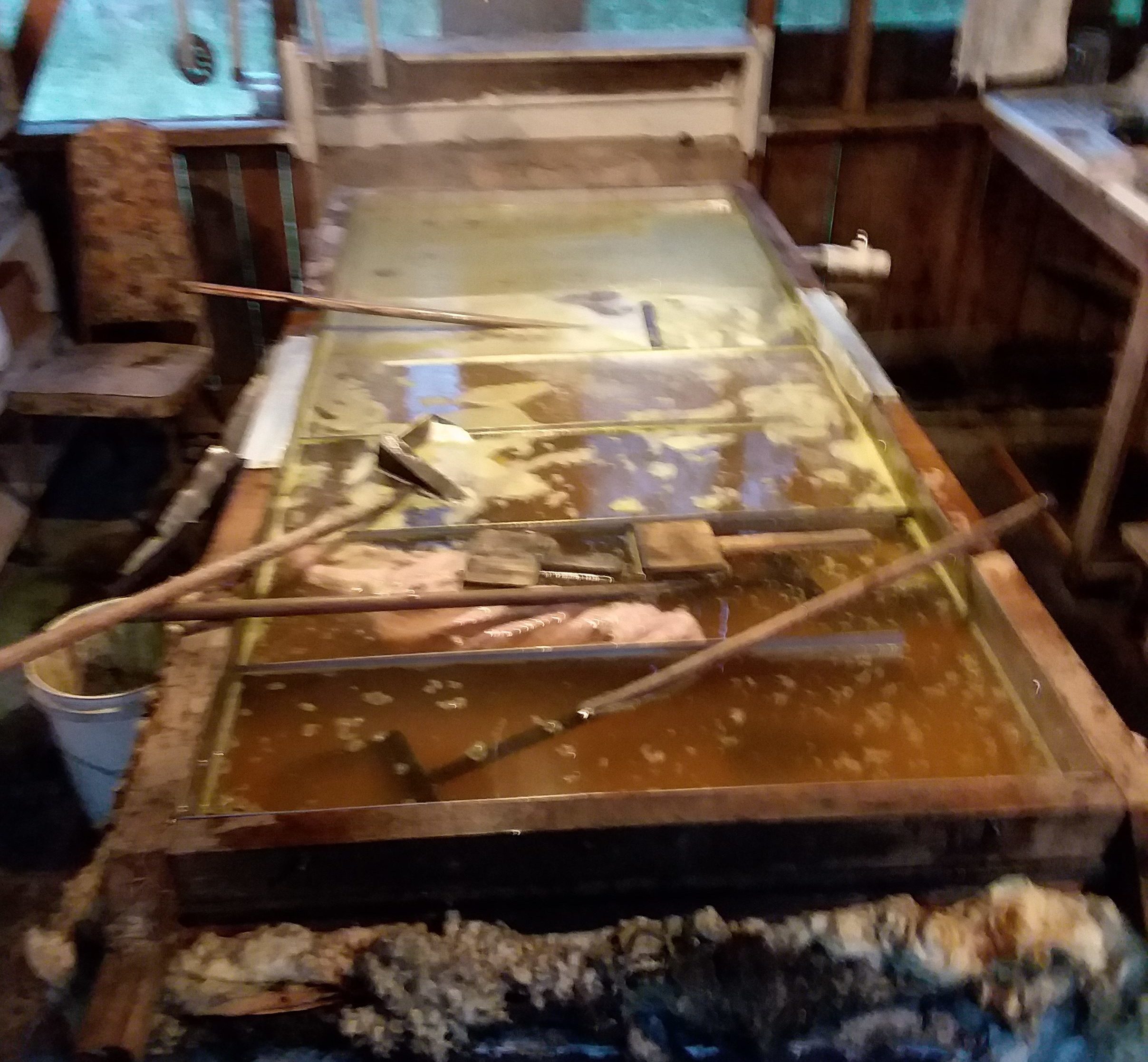 After cooking about 90 gallons of sorghum juice over more than 6 hours, the pan and all the skimmers get a good soaking before being cleaned out.

After the Sorghum Has Been Rendered

When the sorghum juice has been rendered and filtered the pan gets filled with water to loosen all the sugar from the skimmers and baffles and the pan. It’ll get cleaned out and covered, and the firebox will get cleaned out when it cools down.

Next week, the process starts over again and goes until all the sorghum is harvested. 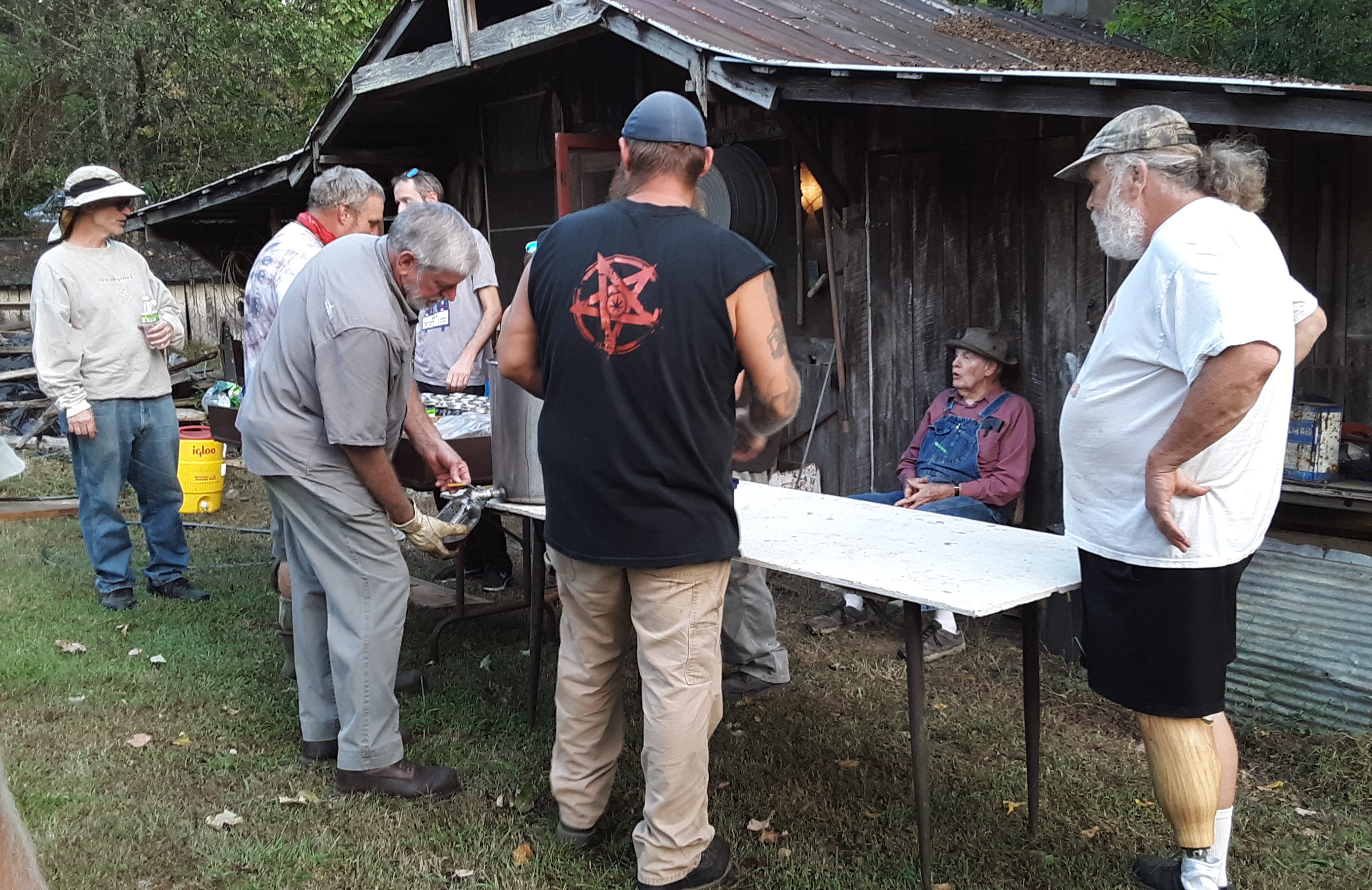 When the collection pot gets pretty full, it is taken out of the cookhouse and used to fill quart mason jars with molasses.

While the molasses is still hot, it goes into quart canning jars. The sorghum juice gets cooked down from about 8 or 10 parts to one, depending on the amount of sugar or water in the plants. I think we ended up with almost 50 quarts of molasses this time. 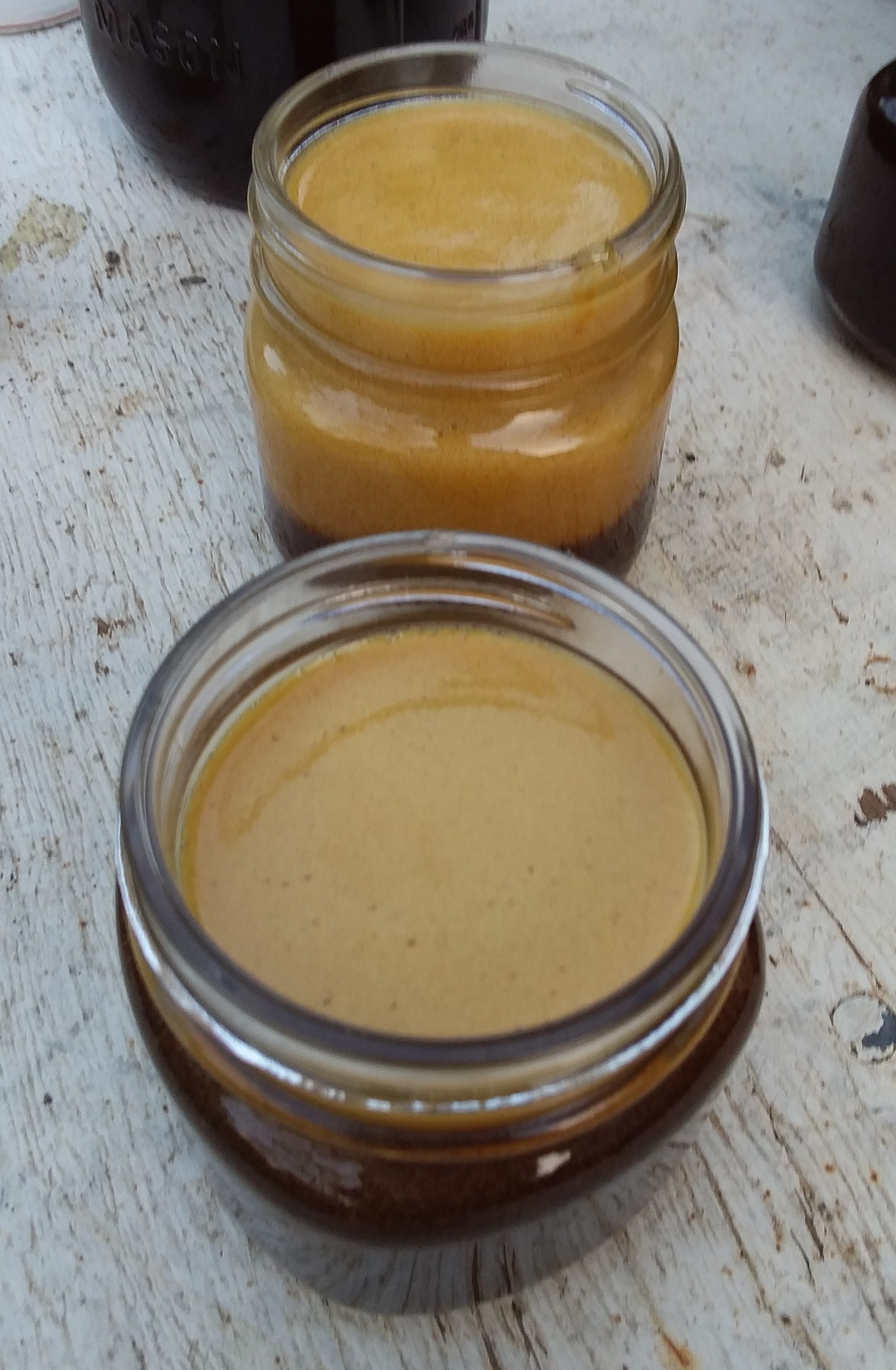 The last sorghum molasses to be poured has this foamy top that cools into a candy-like substance that is delicious. 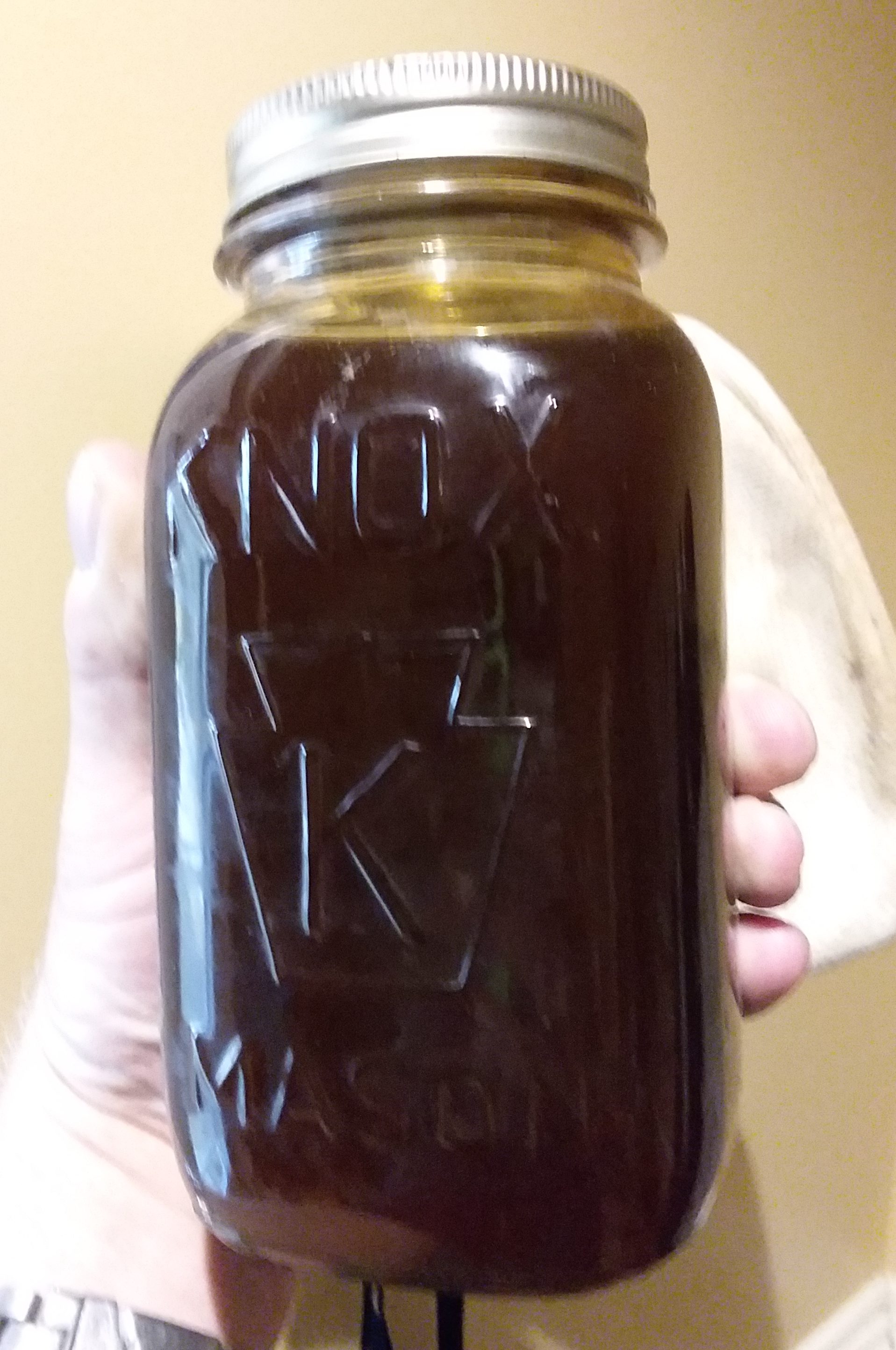 A one-quart Knox Mason jar of home made sorghum molasses.

This is the finished product. The last of the sorghum that gets canned usually has a “head” on it… a foamy, sugary treat that is good on ice cream! The rest of the sorghum went into quart jars and everyone who worked on this batch took some home.

We brought home our share (two quarts) plus our friend James gave us his two quart share (because he’s going to make a lot more molasses in the coming weeks), so we have a gallon of sorghum molasses to use over the coming year.

I like putting molasses in tea and in my “fake coffee”. We also use it in baking and on toast. It’s a great winter treat for those with a sweet tooth!